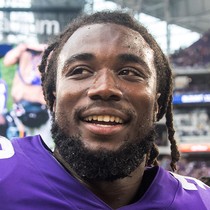 Dalvin Cook would ‘gladly’ accept a deal worth $13 million annually?

RB Dalvin Cook would “gladly” accept an offer in the $13 million-per-year range, per Courtney Croonin of ESPN. He is currently holding out until a “reasonable extension” can be reached. (Source: Courtney Cronin of ESPN)

Fantasy Impact: “The number has dropped in recent negotiations to under $15 million, but neither side has yet to come to an agreement,” Croonin added. “It’s more reasonable to think the Vikings could offer the $13 million-per-year range given Cook's value, injury history, their salary cap situation and the value of running backs in today's NFL. That's still top-five money at the position and would allow him to earn what Houston's David Johnson is set to make in 2020. And it's an offer sources say Cook would gladly take.” Cook announced on Monday that he is holding out until a “reasonable deal” can be reached. He will not report to camp and beyond. The 24-year-old is looking to be one the NFL’s top paid running backs. A deal of $13 million annually would certainly put him in the top-five. Cook, when healthy proved to be one of the Vikings top offensive weapons, rushing for 1,135 yards and 13 touchdowns in 2019. With the recent news of a holdout, Cook has dropped to fifth among all running backs in the latest expert consensus rankings. 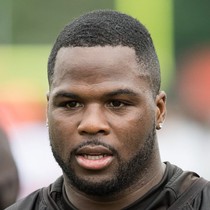 The Seahawks are expected to find a role for RB Carlos Hyde. (Source: Bob Condetta on Twitter )

Fantasy Impact: “Everybody knows RB Chris Carson is the starter in Seattle,” said Hyde. “ He’ll come into compete with Carson while understanding he’s most likely competing for the number two spot.” With RB Rashaad Penny likely to land on the PUP, the team is expected to find a role for Hyde. The 29-year-old should be fully recovered from off-season shoulder surgery and is expected to be all systems go by Week 1. Hyde is coming off a terrific 2019 campaign, logging 245 carries for 1,070 yards and six touchdowns across 26 games for the Texans. He is currently 71st among all running backs in the latest expert consensus rankings. 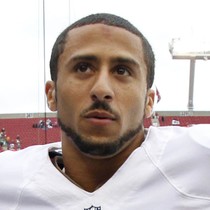 While Colin Kaepernick remains unsigned, Mark Maske of The Washington Post notes that there are increased hopes by some in and around the NFL that circumstances are more favorable for a team to sign the veteran free agent. (Source: Mark Maske on Twitter)

Fantasy Impact: If he does sign this offseason, Kaepernick would almost certainly enter the new year in a back-up role, giving him little to no immediate value in fantasy football leagues. 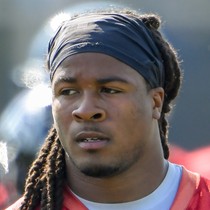 Devonta Freeman: Bucs have interest if price tag is 'reasonable'

Fantasy Impact: "He's asking for a lot of money and we don't have a lot of money" Arians said. The organization already has Ronald Jones, Ke'Shawn Vaughn, and Dare Ogunbowale in house. A Freeman signing is therefore unlikely but it is interesting to note the team would be willing to bring in another body. Freeman has said he is willing to skip the entire 2020 season if his asking price isn't met. 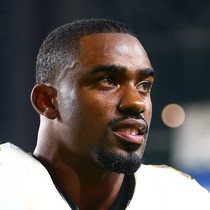 RB Raheem Mostert "could see a deal get done ahead of TE George Kittle’s," per Matt Barrows of the Athletic. (Source: The Athletic)

Fantasy Impact: "The 49ers also could ink extensions with two guys who could see new deals this year: Kendick Bourne and running back Raheem Mostert, who have outplayed their current contracts. Mostert, in fact, could see a deal get done ahead of Kittle’s," said Barrows. It was reported that the 49ers and Kittle remain "far apart" on a contract extension. Mostert is set to make $3.15 million in 2020 as the team focuses on signing the 28-year-old RB to an long-term deal. RBs Tevin Coleman and Jerrick McKinnon are entering the final year of their contracts. Mostert added weight this off-season in preparation of taking on a heavy workload. He logged 190 carries for 1,108 yards and 13 touchdowns last season (postseason included). Mostert is currently 26th among all running backs in the latest expert consensus rankings, but a contract extension could only help him rise in the RB ranks.

Boston Scott viewed as an offensive weapon for the Eagles

According to The Athletic Philadelphia, Eagles RB Boston Scott will be competing for more of an offensive role this Summer, rather than competing for a roster spot. (Source: Zach Berman on Twitter)

Fantasy Impact: After a coming out party in the back half of the 2019 season, Philadelphia feels comfortable with Scott as a change of pace and third-down back for the Eagles. Miles Sanders will of course take over as the starter in Philadelphia, but Scott is certain to play in a complementary role. In his final four games last season, Scott averaged 87.5 yards from scrimmage. He’s currently ranked RB #55 in FantasyPros Expert Consensus Rankings (ECR). His value could increase if the Eagles don’t end up signing a veteran RB as has been rumored. Even with another back in Philadelphia, look for Scott to maintain standalone value as an RB4 or RB5 this season. 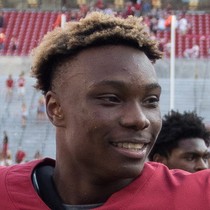 Fantasy Impact: From a number of reports, Ruggs III appears to have escaped a major thigh injury helping a friend move over the weekend. While these are just rumors, the Raiders seem to have acknowledged that something did indeed occur with Ruggs III this weekend. The rumor started as a post on a SEC fansite message board. Expect him to be ok, but also expect Ruggs III and/or the team to address the issue in the coming days.

Indianapolis Colts head coach Frank Reich plans to use Mo Alie-Cox more in 2020 as both a blocking and receiving tight end. Alie-Cox played 32.9% of the Colts' offensive snaps in 2020. (Source: Andrew Walker on Twitter)

Fantasy Impact: The Colts allowed Eric Ebron to depart via free agency but brought in Trey Burton who will challenge Alie-Cox for snaps as the backup tight end behind veteran Jack Doyle. If the Colts go to more three wide receiver sets with T.Y. Hilton, Parris Campbell, and rookie Micheal Pittman Jr. there may not be much room for the backup tight ends to see a lot of volume in this offense. Mo Alie-Cox, who is entering his fourth season in the league, has only caught 15 passes in his career and does not need to be on your fantasy radar entering the 2020 season. 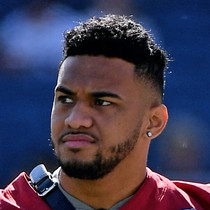 Tua Tagovailoa: a ‘foregone conclusion’ he starts Week 1 for Miami

According to every NFL head coach Mike Freeman has spoken to, it is a “foregone conclusion” that Dolphins QB Tua Tagovailoa will beat out veteran QB Ryan Fitzpatrick and start Week 1 against the New England Patriots. (Source: Mike Freeman)

Fantasy Impact: It was reported earlier that the Dolphins coaching staff “wasn’t opposed to” starting Tagovailoa at “some point” during the 2020 season should he earn the role. The narrative seems to be shifting a bit, and fantasy owners are sure to feel the excitement. If the fifth-overall pick out of Alabama gets the opportunity to start right away in Miami, consider him a solid QB2 with obvious QB1 upside due to his dynamic skillset. Fantasy owners will want to wait for more clarity on this situation, but Tagovailoa’s ADP will surely be on the rise if more and more reports speak to him beating out Fitzpatrick for the starting job in Miami.