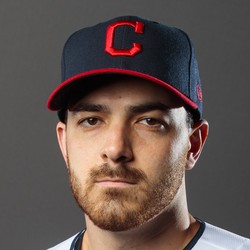 Cleveland Indians right-hander Aaron Civale allowed just one run over three innings in an 11-7 Cactus League win over the Giants on Monday.

Civale rang up six strikeouts in the outing with the only damage coming via a solo homer off Alex Dickerson's bat. Civale has a spot in the starting rotation locked up and should be on the fantasy radar in mixed leagues.

Cleveland Indians right-hander Aaron Civale tossed two scoreless innings in his first start of the spring on Wednesday. The Indians went on to beat Arizona 6-2.

Civale dealt with a groin injury in the early stages of the spring but he appears to be over that issue now. The young right-hander shouldn't have much trouble locking down a spot in the starting rotation.

Civale has been working through a groin issue for the past couple of weeks but there's nothing to indicate that the injury is a long-term concern. Civale is being counted on to solidify the Cleveland rotation with Mike Clevinger recovering from knee surgery.

Aaron Civale (groin) is scheduled to throw in a sim game.

Civale had been dealing with a sore groin so is being eased back into things. Expect the 24-year-old to make his spring debut in the near future.

Cleveland Indians right-hander Aaron Civale struggled in an 8-0 loss to the White Sox on Thursday. Civale allowed four runs over 3 1/3 innings while striking out four and walking three.

Matthew Terelle41 weeks ago
Who Should I Draft?
Do Not Sell
Are you looking to contact Customer Support about a subscription or account related question?
Yes
No, I'm a California resident looking for the California Consumer Privacy Act form