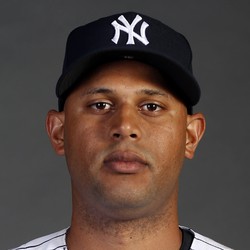 Aaron Hicks is set to undergo Tommy John surgery on his right elbow next week.

Hicks played in the ALCS against the Astros but was battling elbow discomfort for a while. He will be sidelined for 8-10 months, which means he will miss roughly the first half of the 2020 regular season.

Aaron Hicks (elbow) met with Dr. Neal ElAttrache, who recommended Hicks rest for a few more weeks before being re-evaluated.

Hicks will avoid Tommy John surgery for now. The hope is that the rest-and-rehab method will allow him to move past the problematic elbow. This news decreases the chances of him playing in 2019. Look for Cameron Maybin and Clint Frazier to continue to receive extra playing time in Hicks absence.

Aaron Hicks has been shut down from a throwing program after "not feeling quite right", per Aaron Boone.

Hicks has been on the I.L since August 3rd with a right elbow flexor strain. He had began a throwing program on Monday, but hadn't been able to make much progress per Aaron Boone. Boone also revealed that an MRI showed no damage, but conceded the possibility that Hicks may not be able to return in time to contribute this season. The next few days will be key in answering that question.

Aaron Hicks has been cleared to begin a throwing program.

Hicks last played on August 3rd and has been sidelined with an elbow injury. Clearance to begin throwing marks a big step in the rehab process, and the Yankees will hope that he returns soon to help them try to secure home field advantage for the playoffs.

Aaron Hicks (elbow) won't be cleared to throw for at least another two weeks, Meredith Marakovits of YES Network reports.

This is not good news for fantasy owners as it pushed back Hick's timetable to a return date around early-to-mid September. Owners may want to look for other options as Hicks will probably not be ready for the fantasy playoffs.