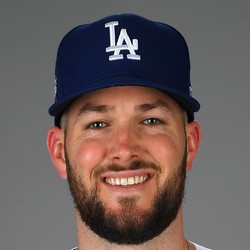 Free-agent starting pitcher Alex Wood has agreed to a one-year deal worth $4 million with the Los Angeles Dodgers, according to MLB insider Ken Rosenthal. Rosenthal adds that the deal includes incentives that can push the total salary to $10 million.

The oft-injured Wood had some of his best seasons with the Dodgers before agreeing to a deal with the Reds last offseason, but he only made seven starts for the Reds last year and did not have much success. He'll try to bounce back in a familiar place in 2020, and the Dodgers add another arm as they attempt to retool their starting rotation after the departures of Hyun-jin Ryu and Rich Hill.

Alex Wood will no longer start Tuesday against the Phillies due to a back injury.

Wood missed the first four months of the season with a back issue, which has evidently resurfaced. He has posted a 5.80 ERA across seven starts since being activated in July. It's unclear how long the back injury will keep Wood out for this time.

Alex Wood did not factor into the decision in Thursday's loss to the Marlins, allowing three runs on six hits and two walks while striking out eight in six innings.

Wood's final line looks solid, but he did allow three solo homers. Despite that, Wood logged his second quality start of the season after struggling in his last three outings. He'll carry a 5.80 ERA and 1.40 WHIP into Tuesday's matchup against the Phillies.

Alex Wood (1-3) allowed five runs (four earned) on two hits and three walks across 5.1 innings Saturday, earning him the loss against the Pirates.

It was a two-run game in the sixth, but the Reds' bullpen surrendered a grand slam that effectively put things out of reach. Wood has now lost three straight, putting his season ERA at 6.07, his WHIP at 1.42, and he has 22 strikeouts in 29.2 innings.

Wood allowed eight hits and five runs (four earned) in five innings to drop to 1-2 on the year. He’s now lost two consecutive decisions, and spots a 5.92 ERA in 2019.