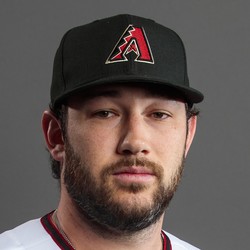 Alex Young is a leading candidate to take on Arizona's No. 5 start spot after Mike Leake announced he will not be taking part in the 2020 season.

Alex Young fell to 7-5 on Monday versus St. Louis, giving up six runs on seven hits over five innings pitched.

Young struck out five and walked two in the outing. Most of the damage came via a season-high three homers allowed, however. The 26-year-old lefty has mostly been solid this season and this was his first bad start in a while. He'll carry a 3.74 ERA into a final start against the Padres on Sunday.

Alex Young took the loss on Thursday against the Mets, giving up six runs (but just one earned) on five hits over 2 2/3 innings pitched.

The lefty allowed two homers, struck out three, and walked two. A Nick Ahmed error basically saved his ERA but Young has now allowed three earned runs or less in five straight starts. He'll carry a 3.38 ERA into a matchup with the Marlins next time out.

Alex Young received a no-decision on Sunday against the Dodgers, giving up two runs on five hits over 4 1/3 innings pitched.

Overall Young pitched pretty well in a tough matchup, striking out five without walking anyone. The lefty continues to surprise this year, posting a 3.84 ERA through 11 starts. He'll be a deep-league streaming option this weekend versus the Reds.

Alex Young improved to 6-3 on Monday in San Francisco, allowing two runs (one earned) on four hits over 5 1/3 innings pitched.

Young struck out four and walked two as Arizona went on to win 6-4. The 25-year-old has been solid with the Diamondbacks this year, posting a 3.81 ERA through 11 appearances. However, he doesn't strike out enough batter to be very fantasy relevant. Fantasy players should avoid Young in his next outing against the Dodgers.

Brendan Tuma - Too Much Tuma46 weeks ago
Who Should I Draft?
Do Not Sell
Are you looking to contact Customer Support about a subscription or account related question?
Yes
No, I'm a California resident looking for the California Consumer Privacy Act form