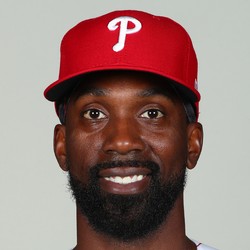 Andrew McCutchen (knee) says he will be ready to go whenever the season begins.

McCutchen underwent reconstructive surgery on his ACL last June and was slated to miss the first few weeks of the 2020 season before the coronavirus pandemic interfered. However, the 33-year-old will now be ready if and when the season gets underway.

According to Matt Gelb on Twitter, Andrew McCutchen will be not be ready for Opening Day and the team hopes that he will be able to play some time in April.

The 11th-year center fielder got off to a hot start with Philadelphia last year slashing .256 / .378 / .457 with 10 HR, 45 R, 29 RBI, and two SB over a 59-game stretch. Although the team hopes he may return in April, that type of uncertainty combined with McCutchen's age will push him off of most draft boards. He'll be worth a stash once once there is more clarity surrounding his return, assuming that he will take over his leadoff again.

Phillies outfielder Andrew McCutchen tore his ACL in Monday's game against the San Diego and is out for the season, according to Phillies beat writer Matt Gelb.

McCutchen left Monday's game after injuring his knee during a rundown in the first inning, and he looked to be in obvious pain as he was helped off the field. He had been off to a strong start with his new team while batting leadoff, slashing .256 / .378 / .457 with 10 home runs, 45 runs scored, 29 RBIs, and two stolen bases through 59 games. In Tuesday's lineup, second baseman Cesar Hernandez is leading off, with Bryce Harper moving into the two spot and shortstop Jean Segura dropping from second to third in the order. If this lineup sticks, Hernandez should see an uptick in value for the rest of the season.

Phillies outfielder Andrew McCutchen appeared to injure his knee during a rundown in the first inning of Monday’s game against the San Diego Padres. He was replaced by the recently-acquired Jay Bruce.

McCutchen appeared to be in obvious pain and had to be helped off the field after a non-contact injury, which are both bad signs. Look for an update on his status on Tuesday once he is able to be evaluated by the Philadelphia training staff.

Phillies outfielder Andrew McCutchen went 1-for-4 with a solo home run in Friday's loss to the Los Angeles Dodgers. The homer was his 10th of the season.

McCutchen now has three home runs over his last six games and is batting .261 with 10 home runs, 45 runs scored, 29 RBIs, and two stolen bases while he continues to bat leadoff to the Phillies.