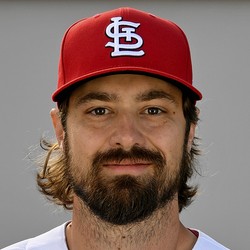 Andrew Miller (arm, fingers) is now considered to be on a normal program for the Cardinals.

Miller was struggling to get a feel for his pitches during spring training but those issues are apparently behind him. The cure for him was a change in medications and additional physical therapy. The lefty should be ready to rock and roll should the MLB season begin sometime this summer. Miller is trying to rebound from two straight underperforming seasons.

Miller was having trouble "getting a feel for the baseball" this spring. However, the lefty reliever made a change to his medications recently, which seemed to help a bit. Miller was never having any pain while throwing, which is great to hear. With the season delayed there is a chance he could be ready to go once camp resumes.

Andrew Miller (arm, fingers) is considered doubtful to be ready for Opening Day.

Miller has struggled gripping a baseball in recent days and the Cardinals aren't exactly sure as to why. The good news is he isn't having any actually pain while pitching. The 34-year-old was recently considered to be one of the best relievers in baseball but has posted an ERA north of 4.00 in each of the past two seasons.

Andrew Miller underwent a series of tests Tuesday for an unidentified arm issue that's affecting his feel for the ball.

Miller had difficulty warming up on Monday and did not make his scheduled relief appearance. “I’ve probably been dealing with it for awhile,” Miller said. “There was no moment of pop, pull, ‘That hurt,’ or, ‘That felt weird,’ kind of thing. And then, OK, this is clear-cut, on this day I was fine, on this day I was not. It’s probably been a pretty gradual thing." While his arm issue remains a mystery, he is currently day-to-day. The 34-year old entrenched as one of the top setup men for the Cardinals' bullpen, and could see a few additional save opportunities with Jordan Hicks (elbow) sidelined until mid-season.

Andrew Miller warmed up Monday but didn't get into the game against the Twins because he couldn't get a feel for the ball.

Miller said "nothing physically hurts," that he was just having trouble getting a feel for the ball. The Cardinals are exploring reasons to pinpoint what actually went wrong with the veteran lefty. He will most likely undergo further testing. Miller is entrenched as one of the top setup men for the Cardinals' bullpen, and could see a few additional save opportunities with Jordan Hicks (elbow) sidelined until mid-season.