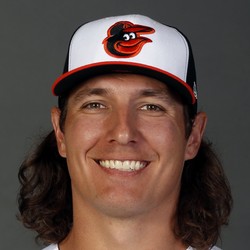 Asher Wojciechowski picked up the win after giving up four hits and a walk while striking out six over six scoreless innings Friday night against the Red Sox.

Wojciechowski made his last start on Friday and finishes with a 4-8 record with a 4.92 ERA and 1.31 WHIP with 80 strikeouts over 82 1/3 innings. Woj should get a chance to earn a spot in the Orioles rotation in 2020 but will not be worth owning in standard fantasy leagues.

Asher Wojciechowski allowed three runs (two earned) on six hits and two walks while striking out four across 4.1 innings Saturday against the Mariners. He did not factor in the decision.

Wojciechowski had a nice run when he was called up in July by the Orioles but has been struggling. Overall he is 3-8 with a 5.31 ERA and 1.35 WHIP across 76 1/3 innings. Woj is expected to make his final start of the season Friday at Boston.

Asher Wojciechowski allowed four runs on five hits and a walk while striking out five over seven innings Monday against Tampa Bay. He didn't factor into the decision.

Wojciechowski is 2-7 on the year with a 5.12 ERA and has gone seven straight starts without a win. The 30-year-old righty looks to get back into the win column in his next start, which is on Saturday against Texas.

Asher Wojciechowski allowed five earned runs on six hits and no walks while striking out three across four innings to take the loss Wednesday against the Nationals.

Wojciechowski drops to 2-7 on the season with a 5.12 ERA and 1.28 WHIP with 61 strikeouts across 58 innings. The 30-year-old pitcher will look to get his third win in his next start when he faces the Rays in Tampa Bay on Monday.

Asher Wojciechowski allowed two runs on four hits with three walks and two strikeouts during a no-decision against the Rays on Thursday.

Wojciechowski gave up two home runs on Thursday and has given up nine over his last five starts. The 30-year-old starter now has a 2-6 record with a 4.67 ERA, 1.26 WHIP, and 58 strikeouts in 54 innings this season.