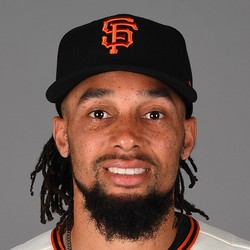 Billy Hamilton has signed a minor league contract with the San Francisco Giants. This comes on the heels of Hunter Pence also signing a minor league deal with the Giants.

Hamilton has always been a speed first fantasy asset, as he has not had a batting average over .250 or more than five home runs in three years. Give the Giants outfield situation, however, there is a chance he can come up with enough playing time to make a difference. Anywhere near 500 plate appearances should be enough for Hamilton to steal 30 or more bags as usual.

Billy Hamilton's 2020 $7.5M team option is being declined by the Atlanta Braves, according to MLB insider Jon Heyman.

Once considered a top prospect with elite speed, Hamilton has never really been able to add much more to his game than top-notch speed and above-average defense. The Braves picked him up in 2019, but there was little doubt that they were going to decline his expensive option for next year. He should catch on somewhere else quickly either as a fourth outfielder for a contender or a potential starter for a rebuilding or retooling squad.

Billy Hamilton was claimed by the Braves on Monday.

With Austin Riley, Ender Inciarte, and Nick Markakis all on the injured list, the Braves needed outfield depth. Hamilton will mainly be used as a pinch runner and a defensive replacement. He will be a massive upgrade on defense over Adam Duvall or Matt Joyce. Hamilton hit .211 with 0 home runs and 18 steals in 93 games with the Royals before being optioned to the minors.

Kansas City Royals outfielder Billy Hamilton went 0-for-4 with two strikeouts in a 5-4 loss to the Indians on Thursday.

Hamilton's down season continues. Now a part-time player, the speedy outfielder is hitting .214 with 30 runs, 12 RBI, and just 17 steals. He is on pace for a career low in stolen bases.

Matthew Terelle44 weeks ago
Billy Hamilton drives in two, steals a base

Kansas City Royals outfielder Billy Hamilton went 2-for-4 with a double, two RBI, and a steal in a 6-5 win over the White Sox on Thursday.

Hamilton had one of his better games in recent memory. It has been a disappointing first season in Kansas City as Hamilton is hitting just .221 with 30 homers, 12 runs, and 17 steals.