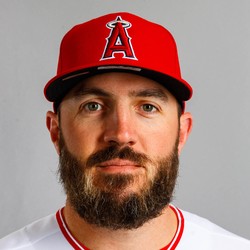 Free agent reliever Blake Parker has agreed to a major league deal with the Philadelphia Phillies, according to a report from MLB insider Ken Rosenthal.

Parker was designated for assignment by the Twins and ultimately released last week, making him a free agent. He pitched to a 4.21 ERA and 34 strikeouts over 36 1/3 innings this season but has a career ERA of just 3.42 and was a solid back-end option for Minnesota the last two seasons. The Phillies are desperate for pitching help across the board, and Parker should immediately step into late-inning work in Philadelphia.

Minnesota Twins reliever Blake Parker pitched a scoreless inning in a 5-3 loss to Oakland on Friday. Parker struck out one in the frame.

Blake Parker was placed on the paternity list Friday.

Parker will step away from the team for a few days to attend the birth of his child. He will most likely rejoin the team after the All-Star break. Kohl Stewart was recalled from Triple-A Rochester to give the Twins another option out of the bullpen.

Minnesota Twins reliever Blake Parker pitched two scoreless innings in a 4-3 win over the A's on Wednesday. Parker struck out three and walked two in the win.

He was credited with his first win of the season. Parker now has a 3.77 ERA, 1.32 WHIP, 10 saves, and 29 strikeouts in 31 innings of work. Overtaken by Taylor Rogers as the team's primary closer, Parker still has marginal value as a setup man.

Minnesota Twins reliever Blake Parker threw a scoreless inning in a 5-2 loss to the Rays on Thursday. Parker gave up two hits, walked one, and struck out one in the 18-inning game.

The Twins cleared out the bullpen, even calling on this past Tuesday's starter Kyle Gibson to throw an inning. Parker now has a 3.86 ERA and 10 saves. He has lost the closer's role to Taylor Rogers but he still gets the occasional save chance.