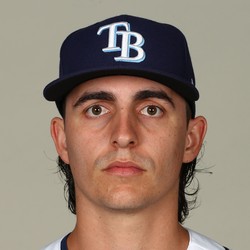 Brent Honeywell (elbow) is scheduled to begin a throwing program in January.

Honeywell, who was once an elite pitching prospect, is trying to come back from two major elbow surgeries over the past couple of years. In 2017 he underwent Tommy John surgery and then fractured his elbow after returning this past season. The 24-year-old is probably still a year out from major league action. 2020 will be about keeping him healthy and intact.

Brent Honeywell fractured a bone in his elbow while throwing a bullpen session Saturday and will miss the rest of the season, Marc Topkin of the Tampa Bay Times reports.

Honeywell can't catch a break as he has been fighting his way back from Tommy John surgery and was hoping to pitch for the Rays in the second half of the season. Fantasy owners keeping Honeywell stashed can drop him unless it is a dynasty format.

A visit with Dr. James Andrews confirmed that Rays RHP prospect Brent Honeywell is dealing with nerve irritation in his right arm.

Honeywell has been rehabbing as he comes back from Tommy John surgery. He now faces an unclear timetable following this setback. He'll avoid throwing for a week and will then be re-evaluated Monday, at which point a clearer picture could emerge. Fantasy owners should keep an eye on updates.

Tampa Bay Rays prospect Brent Honeywell Jr. has been shut down from throwing again due to a potential nerve issue in his upper arm, according to Marc Topkin of the Tampa Bay Times. The current plan for him is to rest and then go for testing next week.

Honeywell had been shut down initially in mid-April due to elbow discomfort, so the fact that he is still having issues is concerning. Elbow and forearm injuries always carry with them the worry of Tommy John surgery, and Honeywell already has one of those surgeries under his belt from February of 2018. Look for an update on his status next week.

Brent Honeywell (elbow) is slated to pitch in an extended spring training game on Saturday.

Honeywell will either throw one inning or 25 pitches, whichever comes first. The young hurler underwent Tommy John surgery last February and is expected to join the Rays sometime mid-season.