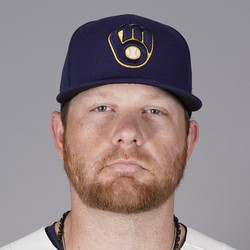 Brett Anderson (13-9) allowed three hits and one walk while striking out three over five scoreless innings in Saturday's 1-0 win over the Mariners. He picked up his 13th win of the season.

Brett Anderson allowed one run on five hits and zero walks while striking out two through five innings in Tuesday's 2-1 win over the Royals. He did not factor into the decision.

Anderson was pulled after five frames for his third straight start. Oakland has won each of Anderson's last three starts while he has surrendered six earned runs over 15 innings. Anderson sports a 4.00 ERA, 1.32 WHIP and a 87:48 K:BB in 171 innings this season. His next scheduled start is Tuesday, away against the Angels.

Brett Anderson (12-9) allowed two runs on seven hits and three walks while striking out four through five innings in Wednesday's 5-3 win over the Astros. He picked up his 12th win of the season.

Anderson has now allowed three runs or less in seven of his last eight starts. He owns a 4.07 ERA and 1.33 WHIP with 85 strikeouts in 166 innings this season. His next scheduled start is Tuesday, home against the Royals.

Brett Anderson allowed five runs on nine hits and no walks while striking out four through five innings in Thursday's 10-6 win over the Angels. He did not factor into the decision.

Anderson has allowed three runs or fewer in five of his last seven starts. He didn't walk anyone in Thursday's win, but allowed a pair of home runs in the contest. Anderson owns a 4.19 ERA with a 81:45 K:BB through 161 innings this season. His next scheduled start is Wednesday, away against the Astros.

Brett Anderson (11-9) allowed two runs on six hits and two walks while striking out one through six innings in Friday's 8-2 win over the Yankees. He picked up his eighth win of the season.

Despite striking out only one batter, Anderson still managed to pick up the win. He is 2-4 with a 4.39 ERA during the second half. Anderson owns a 4.04 ERA, 1.30 WHIP and 77 strikeouts in 156 innings this season. His next scheduled start is Friday, home against the Tigers. Anderson can be used a streamer for Friday's contest.