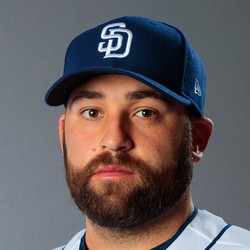 Brett Kennedy allowed four runs in 1 2/3 innings against the Reds on Friday. He gave up one hit and four walks while striking out two. He raised his season ERA to 6.75.

Kennedy had absolutely no command on the mound today. Anytime you walk four batters in the same inning you are looking for trouble. He did have his start delayed more than two hours due to rain. Kennedy did however escape this outing with a no-decision. Kennedy will have a full week to think about this one. His next start will be on Friday at home against the Rangers.

Brett Kennedy won his first career game on Friday against the Rockies. He pitched six scoreless innings allowing four hits, two walks and struck out two. He lowered his season ERA to 5.76.

Kennedy pitched well against the Rockies but still is not ownable outside of extremely deep leagues. Since he pitches for the Padres it will be difficult to register wins. He currently owns a 5.76 SO/9 which means he has as many strikeouts as earned runs allowed, 16, in 25 innings. His next matchup is against the Reds on the road.

Brett Kennedy allowed three run in five innings against the Dodgers receiving a no-decision on Saturday. He gave up five hits and two walks while striking out five. His ERA currently sits at 7.58.

Since Kennedy's first two outings his number have become much more tolerable. In his previous two outings he has a 4.50 ERA with nine strikeouts and a 1.60 WHIP in 10 innings. Kennedy should stay in the rotation since the Padres have nothing better than seeing what their young arms can do. He is not worth owning in any redraft leagues.

Brett Kennedy allowed two runs in five innings against the Diamondbacks on Sunday. He gave up six hits and three walks while striking out four. He lowered his season ERA to 8.36.

Kennedy has been awful thus far in his big league career. Today was the first positive sign he has shown. Kennedy is a long way from fantasy relevance but at least the arrow may begin to be pointing upward.

Brett Kennedy allowed five runs in five innings against the Angels on Tuesday. He gave up nine hits and one walk while striking out two. He lowered his ERA to 11.00.

Kennedy has been overmatched thus far in his two starts as a pro. The larger issue with the Padres is not whether or not Kennedy should remain in the rotation? It is who can take his spot in the rotation? Kennedy may end up getting a couple of more chances in the majors but he should not be rostered in any redraft leagues.