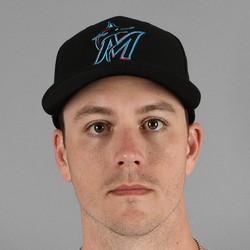 Brian Anderson will not require surgery on his left hand.

Anderson suffered a broken finger in his left hand Friday after being struck by a pitch. Although he’s been ruled out for the season, he will avoid surgery. Anderson should be ready by spring training.

Marlins outfielder Brian Anderson suffered a broken hand after being hit by a pitch during Friday's game against the Philadelphia Phillies and is done for the season, according to reports.

Anderson was having a solid season in Miami and was one of the few Marlins players worth rostering in most fantasy formats. Through 126 games, he batted .261 with 57 runs scored, 20 home runs, 66 RBI, and five stolen bases while being eligible at both third base and the outfield.

Marlins outfielder Brian Anderson went 2-for-5 with a double and an RBI in Sunday's loss to the Rockies. The double was his 32nd of the season.

Anderson has hit in four straight games and has multiple hits in three of those contests as he continues to stay hot in August. He is now hitting .338 for the month with four home runs and eight doubles through 17 games.

Marlins outfielder Brian Anderson went 2-for-4 with two home runs and three RBIs in Thursday's win over the Braves. The homers were his 19th and 20th of the season.

Anderson has now homered in back-to-back games and four times in his last five games as he continues to discover his power stroke.

Marlins outfielder Brian Anderson went 2-for-5 with a solo home run and two runs scored in Monday's win over the Diamondbacks.

Anderson now has hits in six straight games and homers in back-to-back games to give him 15 home runs on the year. He is still batting just .247 on the year but could be a valuable short-term pickup if he continues to get hot as he is available in 65% of leagues.