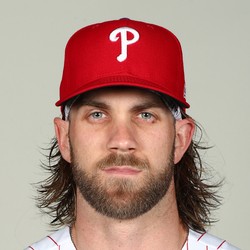 Bryce Harper (toe) suffered a bruised left big toe after getting hit by a pitch on Tuesday and will return to the field on Friday.

Harper avoided a potential serious injury and was removed from the game for precautionary reasons. He will return to the field on Friday and resume his usual outfield duties. Harper is currently the eighth outfielder in the expert consensus rankings.

Phillies outfielder Bryce Harper was removed from Tuesday's game against the Minnesota Twins after being hit by a pitch in the right foot.

Harper walked off the field on his own power and did not appear to be noticeably limping, so it's liking that his removal is merely precautionary. Check back in on his status later today and tomorrow for updates.

Phillies outfielder Bryce Harper went 1-for-3 with a double, two runs scored, a walk, an RBI, and two stolen bases in Saturday's win over the Red Sox. The steals were his second and third of the Spring.

Harper slugged 35 home runs last season and stole 15 bases, his most steals since he swiped 21 in 2016. If Harper is intending to run more often in 2020, he could be even more valuable in fantasy.

Phillies outfielder Bryce Harper went 1-for-2 with a two-run home run and a walk in Thursday's win over the Toronto Blue Jays. The homer was his third of the Spring.

Harper has now homered three times in the last two days and is now batting .400 with a 1.900 OPS so far this Spring.

Phillies outfielder Bryce Harper went 2-for-3 with two home runs and four RBI in Wednesday's win over the Pittsburgh Pirates. The home runs were his first two of the Spring.

Harper did not have a bad 2019 by any means, but his season seemingly did not match expectations after signing a massive deal with the Phillies in free agency. Still, he set a new career-high with 114 RBI while adding 35 home runs and 15 stolen bases. If he can bring his strikeout rate back down after seeing it tick up above 26% last season, Harper could be a bargain even in the second round of fantasy drafts.