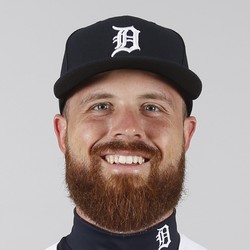 Buck Farmer was tabbed for a spot start against the Twins on Sunday. He allowed two runs on two hits, walked one, and struck out two batters over 2 1/3 frames.

Farmer will likely slide back into the bullpen for Detroit. He doesn't hold any fantasy value at this time.

Buck Farmer exited Monday's game against the Indians after experiencing a left hip spasm. At this point in time, the severity of Farmer's injury is unclear.

For now, Farmer should be considered day to day. The 27-year-old reliever does not provide much for fantasy owners and if he is owned he can be dropped for someone on the waiver wire.

Buck Farmer (4-5) suffered the loss on Sunday allowing five runs (four earned) on seven hits over five innings. He walked three and struck out five Twins during the Tigers' 10-4 loss.

Farmer has allowed four earned runs in each of his last three starts to balloon his season ERA up to 7.12 in 10 starts. He carries a good 9.63 K/9 rate but is allowing 3.35 BB/9 and 1.88 HR/9. He is scheduled to get one final start against the same Twins' team on Saturday in Minnesota. He is not worth fantasy consideration.

Buck Farmer (4-4) gave up five runs (four earned) in just 2 2/3 innings to suffer his fourth loss of the season in the Tigers' 8-3 loss to the A's on Monday. Farmer surrendered six hits including a home run with three strikeouts.

Farmer has failed to pitch past the fourth inning in three of his last four starts and has seen his season ERA balloon up to 7.11. The 26-year-old right-hander is scheduled to face the Twins in each of his last two starts this season. Farmer should not be rostered in fantasy leagues.

Buck Farmer (4-3) was unable to slow down the Indians' win streak on Wednesday suffering his third loss of the season in the 5-3 defeat. Farmer did manage to register seven strikeouts but also gave up four runs on four hits and three walks on 98 pitches over four innings of work.

Farmer's ERA rose to 6.62 in eight starts this season. Since returning to the rotation at the end of August Farmer has gone 2-2 with a matching 6.62 ERA and 16 strikeouts over 17 2/3 innings. His next start is scheduled for Monday at home versus Oakland. Despite two starts next week, Farmer is only viable in deep mixed leagues and AL-only leagues.