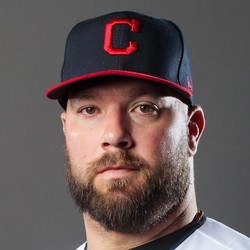 The Phillies improved to 13-2 against the Braves this year with a 5-1 win on Monday. Cameron Rupp provided a big blast with a homer run in the seventh inning. He finished with two RBI and now has 14 home runs and 30 RBI this season.

Rupp has four home runs in his last seven games. His batting average and on-base percentage are low, but Rupp is on pace to surpass last season's career best 16 home runs.

The Phillies used the long ball in a 12-9 win over the Giants on Saturday. Cameron Rupp hit one of the three homers, a solo shot in the ninth. He finished 2-for-4 and is now batting .233 for the season.

Rupp now has 12 home runs and has a chance to top last year's season high of 16. His on-base percentage is a career high, but Rupp's only solid fantasy contribution is in terms of power.

Phillies catcher Cameron Rupp had a solid game against the Braves on Tuesday. Rupp went 1-for-2 with a single and two walks as Philadelphia beat Atlanta 5-2.

Rupp has put together a productive month at the plate, hitting .302 with four homers, seven runs, and 10 RBIs over the past 30 days. He's worth a look in two-catcher leagues and NL-only formats.

The Phillies hit four home runs in their 10-3 win over the Braves on Friday. Cameron Rupp hit one of the four, a solo shot in the fifth inning. He finished 2-for-4 and now has 10 home runs and 23 RBI this season.

Rupp has struggled for much of the season, but is batting .419 (13-for-31) with five home runs and nine RBI over the last nine games.

Philadelphia Phillies catcher Cameron Rupp went 2-for-4 with two solo homers against the Astros on Wednesday. He helped lead the Phillies to a 9-0 win over Houston.

Rupp has been heating up at the plate lately, batting .361 with four homers, eight runs, and eight RBIs over the past month. He now has a .233 average, nine homers, and 23 RBIs on the season. If you need a catcher, he's worth an add considering how well he's been hitting lately.