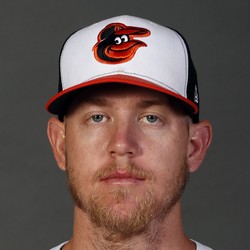 Chance Sisco went 1-for-4 with a solo home run Wednesday as the Orioles lost to the Nationals by an 8-4 score.

Sisco has been slumping at the plate hitting just .143 with a .238 on-base percentage over his last 19 games. The 24-year-old catcher has been losing playing time to Pedro Severino and can be dropped in most fantasy leagues.

ChanceSisco was removed from Sunday's game against the Red Sox after taking a foul ball to the groin area while he was behind the plate in the sixth inning, Nathan Ruiz of The Baltimore Sun reports.

Orioles' manager Brandon Hyde said after Sunday's game that Chance Sisco is still being evaluated by team doctors and they'll have a better update on his condition on Monday. Fantasy owners should keep an eye on updates. If Sisco misses time look for Pedro Severino to see an increase in playing time.

Chance Sisco went 1-for-4 and hit a home run on Saturday as the Orioles beat the Indians by a 13-0 score.

Sisco has been sharing the catching duties with Pedro Severino but may start to get more playing time if he continues to hit. On the year Sisco is now batting .286 with four homers and 14 RBI in 14 games this season.

Chance Sisco went 3-for-5 with a homer, a career-high five RBI, and three runs scored as the Orioles crushed the Indians on Friday by a 13-0 score.

Sisco has been splitting time at catcher with Pedro Severino which has hurt his fantasy value but at some point, he should be getting more playing time. On the season the 24-year-old is hitting .289 with three home runs and 12 RBI over 13 games.

Chance Sisco went 2-for-4 with a double, walk, two RBI and one run scored during a loss to the Blue Jays on Wednesday.

Sisco is currently splitting time at catcher with Pedro Severino which hurts his fantasy value. The 24-year-old is hitting .278 with a homer and four RBI. Sisco has been a top prospect for the Orioles since being drafted in 2013 and if he can get a bigger role will be someone to keep an eye on.