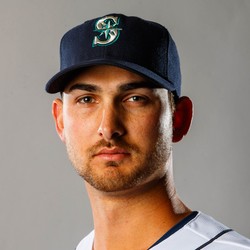 Chase De Jong tossed six innings of two-run ball on Friday against the White Sox, scattering four hits (two solo homers) and a walk. He also struck out four in the contest. The Twins destroyed the White Sox 14-6, evening De Jong's record to 1-1.

Chase De Jong tossed 4 1/3 innings against the Athletics on Saturday, allowing two runs on five hits and a walk. He did not strike out a single batter, and allowed a homer to Marcus Semien. He did not factor into the decision, as Trevor Hildenberger took the loss in the ninth inning.

De Jong has not had a memorable couple starts over the past ten days, but he figures to see another start next week against the White Sox. His 1.63 WHIP says a lot more than his 3.86 ERA.

Chase De Jong made his debut on Sunday against the Blue Jays, pitching four scoreless innings. He allowed just one hit, but did walk four in the outing. He struck out five in the no-decision.

De Jong has been called up just so the Twins can evaluate him going into 2019. He is not worth looking at for fantasy purposes.

Chase De Jong was hit hard on Thursday as the Toronto Blue Jays scored six runs off De Jong. He lasted five innings in the loss, walked three, and struck out one.

De Jong has struggled to miss bats in this early opportunity to start for Seattle. He has a 6.75 ERA and the 6.13 FIP does not indicate he is getting overly unlucky. The sample size is small but screams "do not start" at the moment.

Chase De Jong was given the start on Sunday but did not fare well. De Jong surrendered six earned runs before being yanked with two outs in the third, as the Indians put together an impressive offensive performance against the young right hander.

Young pitchers can struggle in their first round in the majors. De Jong is no exception and without overpowering raw stuff, it should not be surprising the Cleveland offense took advantage in this game.

Kevin Black3 years ago
Who Should I Draft?
Do Not Sell
Are you looking to contact Customer Support about a subscription or account related question?
Yes
No, I'm a California resident looking for the California Consumer Privacy Act form