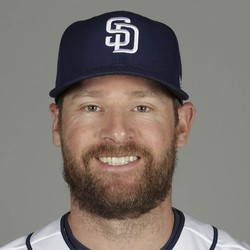 Yahoo 3B
ESPN 3B
CBS 3B
Chase Headley clears waivers; released by Padres

Chase Headley cleared waivers on Saturday and has been released by the Padres.

Headley had no value, even to a team like the Padres, once Christian Villanueva started hitting. He'll likely catch on as a bench bat somewhere but he has no fantasy relevance wherever he lands.

The Padres have acquired Chase Headley and Bryan Mitchell from the Yankees in exchange for Jabari Blash, according to Ken Rosenthal.

Back where it all began for Headley, who at one point was a stud prospect that smashed 31 homers and 115 RBIs in a season for the Padres. This was essentially a salary dump for the Yankees to clear room to stay under the luxury-tax threshold. As for Headley, it's obviously a downgrade in lineup and ballpark, but he'll retain value in NL-only leagues.

Dan Harris2 years ago
Chase Headley heating up in ALCS

Chase Headley went 3-for-4 and scored a run in the Yankees 5-0 win over Houston. He's now hitting .455 for the series.

That turned around fast. The Yankees DH position had been unproductive, but the return to Yankee Stadium has rejuvenated Headley.

Steve Anagnos2 years ago
Chase Headley gets the golden sombrero

Chase Headley went 0-for-4 and struck out three times in the Yankees 7-3 win over the Indians in game four of the ALDS.

The Yankees face Cory Kluber in the deciding game and Headley may have to give way to Matt Holliday at DH after this poor showing.

Chase Headley went 2-for-4 with a solo shot off of Chris Sale that got the Yankees scoring started in their 9-2 win over the Red Sox Sunday night. He is hitting .280 on the season with 11 homers and 54 RBI's.

If you take out the brutal stretch where he couldn't buy a hit, Headley's year wouldn't look so horrible. Unfortunately, that stretch destroyed any owner confidence he may have gained early in the season. Hopefully, you have a better option at 3B and are pushing for your leagues championship.