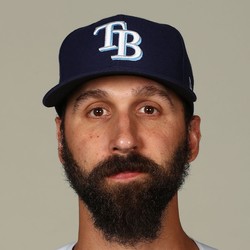 Chaz Roe gave up a hit and a walk in a scoreless ninth inning while striking out one to record his first save of the season in Wednesday's 8-5 win over the Red Sox.

The Rays have not been able to settle on a consistent closer all season and on Wednesday, Roe got his opportunity. It remains to be seen if Roe gets another shot and fantasy owners should keep an eye on the situation to see if someone emerges.

Chaz Roe allowed one run in 1 2/3 innings against the Indians on Saturday. He gave up one hit and struck out one. He raised his season ERA to 3.77 and logged his 25th hold of the season.

Roe came out in the eighth with a man on first and second and no outs. He got out of that situation by forcing the first batter to ground into a double play. He did however allow a solo home run in the ninth that ended up costing him a chance at the save. Roe has been shaky since returning from the DL and can be started in holds leagues and nowhere else.

Douglas Roth1 year ago
Chaz Roe gets rocked by the Braves

Chaz Roe allowed three runs in 1/3 of an inning taking the loss against the Braves on Tuesday. He gave up two hits and a walk. He raised his season ERA to 3.79

The Rays eight-game winning streak ended with the loss tonight. Roe gave up a home run to Tyler Flowers that accounted for all three runs he allowed. Roe will continue to see high leverage situations and should be owned in all holds leagues.

Chaz Roe pitched a perfect inning in relief on Saturday against the Red Sox. He lowered his season ERA to 3.15 and received a hold.

Roe now has 24 holds on the season which ranks him tied for sixth in the league. Since Roe's return from the disabled list he has a 0.00 ERA with eight strikeouts and 0.50 WHIP in six innings. He should be owned in all holds leagues.

Chaz Roe pitched a scoreless eighth against the Royals on Tuesday. He allowed one hit while striking out two. He lowered his season ERA to 3.26.

Roe has continued his great season even after returning from the DL. In four relief appearances since his return, Roe has not allowed a run and struck out seven in 3 2/3 innings. Roe's 22 holds on the season ranks him eighth in the category.