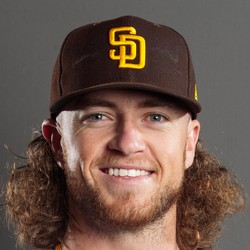 Paddack had enjoyed a nice spring through two starts, but came back to Earth on Sunday. The White Sox tagged him for four earned runs including two homers. The good news is he faced 18 batters and did not issue a walk while striking out two. Paddack owns a 4.00 ERA through nine innings so far in spring.

Chris Paddack allowed no runs on two hits and a walk in three innings in Monday's start against the White Sox. He struck out one.

Paddack is spotless so far in two spring starts, not allowing a run in five innings. Fantasy owners can expect Paddack to build upon his impressive rookie season (3.33 ERA in 26 starts). Some regression may be in order as big league hitters make adjustments, but his arsenal is real and he should be owned in all formats.

Chris Paddack is focusing on honing his curveball this spring.

According to Cassavell, Paddack's curveball was tighter than usual in his spring debut Wednesday. The pitch's velocity also averaged in the upper-70's after averaging 76.1 mph in 2019. An improvement to the curveball will be crucial for Paddack's success this season, as he allowed opposing hitters to bat .267 against it last year, compared to .198 against the other pitches in his arsenal.

Chris Paddack pitched two scoreless innings in his spring debut Wednesday against the Indians, allowing one hit and striking out three.

Paddack retired the side in order in the first, before allowing a leadoff double to begin the second. He was able to retire the following three batters in order, however. Paddack is poised to build upon a sensational rookie campaign, and the Padres will likely impose few restrictions on his innings limitations, if any.

Chris Paddack received a no-decision on Tuesday versus the Brewers, tossing five innings of one-run ball while striking out nine.

Paddack allowed just one hit and one walk in what was his final start of the year. The 23-year-old finishes his rookie season with a 9-7 record and a 3.33 ERA in 140 2/3 innings pitched. Paddack also compiled a 153/31 K/BB ratio and will be an easy top-20 starter entering 2020 fantasy drafts.