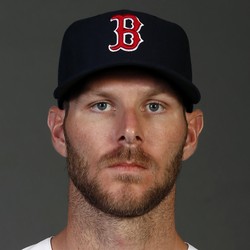 Sale received a PRP injection in his elbow back in August. He will have some follow-up appointments over the off-season but as of now should be good to go for the start of 2020. Sale posted a 4.40 ERA this past season.

Chris Sale (elbow) is expected to resume throwing early in the offseason, Bill Koch of The Providence Journal reports.

Sale was shut down for elbow inflammation in mid-August after a disappointing 2019 season. The lefty finished with a 6-11 record with a 4.40 ERA. If Sale can bounce back and be ready for 2020 he could be a bargain for fantasy owners.

Sale has been ruled out for the season so this move was done to make room for some other players. The veteran lefty is expected to avoid Tommy John surgery after Dr. Andrews confirmed the original diagnosis of elbow inflammation. Sale's treatment plan could change, however, if he doesn't respond well to non-surgical recovery methods.

John Aubin20 weeks ago
Chris Sale still not out of the woods for Tommy John surgery?

On Monday, it was reported that Red Sox ace Chris Sale visited Dr. James Andrews for a second opinion on his ailing elbow and learned that, while he needed a PRP injection, he would not need Tommy John surgery. However, former MLB insider and former MLB general manager Jim Bowden believes that there is more to the story that the Red Sox are not sharing and is not 100% convinced that Tommy John surgery is completely off the table for Sale.

Now, Bowden is not a doctor and is just speculating here, but he does make some interesting points. He points out that while the Red Sox have said that an MRI showed inflammation in Sale's elbow, they have not said what caused that inflammation. Since the treatment they decided to go with was a PRP injection, that rules out bone spurs or loose bodies in the elbow and points more towards there being a slight tear to the UCL or an arthritic condition with the elbow. Look for an update on Sale's status in the coming weeks as we learn more about how he is responding to Monday's treatment.

Mike Maher22 weeks ago
Chris Sale done for the season

Red Sox starting pitcher Chris Sale is being shut down for the remainder of the regular season, according to a report from MLB insider Jeff Passan.

Sale visited Dr. James Andrews on Monday and learned that while he will not need Tommy John surgery, he is being shut down for the rest of the regular season and will be re-evaluated in six weeks. He received a PRP shot in his left elbow. Passan adds that even if the Red Sox make the playoffs, Sale is unlikely to return.