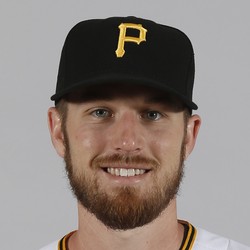 Chris Stratton allowed four runs on seven hits over four innings in the Pirates' 11-1 loss to the Diamondbacks on Wednesday. He walked none and struck out seven.

This would've been a decent outing if it weren't for those pesky home runs, and that's been the story of Stratton's season. He's allowed eight bombs in 34.1 innings, a rate of 2.1 HR/9. With all the injuries Pittsburgh has had, one would think Stratton could make a run at a rotation spot, but he'll need to be better in relief before that happens.

Stratton was designated for assignment prior to Tuesday's game against the Detroit Tigers.

Those in AL-only leagues who took a flier on Stratton didn't get much bang for their buck; the 28-year-old went 0-2 with an 8.59 ERA and 43 hits allowed in just 29 1/3 innings over seven appearances (five starts). He'll probably end up with another team, but he won't be fantasy-worthy when he does.

Stratton went through struggles again in the loss, he's up to a disappointing 7.04 ERA up to this point. He's not a recommended fantasy option.

Stratton took a hard beating but was fortunate to not end up with a loss due to some late Angels offensive magic. He's up to a 7.00 ERA, 2.00 WHIP, and 11 strikeouts through 18 innings pitched. He shouldn't be used.

Stratton was decent in the team's victory with a solid amount of strikeouts but letting a lot of hitters on-base in the four innings. He's got a 5.54 ERA so far and won't be a trustworthy fantasy option as the season progresses, next up is a tough matchup against Seattle.