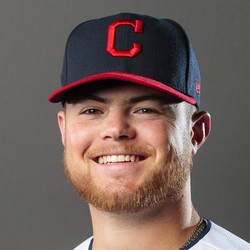 Christian Arroyo went 1-for-3 with a two-run home run on Sunday as the Rays lost to the Twins by a 9-7 score.

Arroyo has hit home runs in two straight games but fantasy owners should get too excited. The utility infielder is hitting just .241 with a .290 on-base percentage and can be left on waiver wires.

Christian Arroyo was placed on the 10-day disabled list Saturday with a left oblique strain, Marc Topkin of the Tampa Bay Times reports.

Arroyo's injury does not serious and should not be out much longer than the 10 days. The 23-year-old infielder has not done much at the plate this season hitting .264 with one home run over 20 games and is not worth stashing in fantasy leagues.

Christian Arroyo has been called up from the Triple-A Durham Bulls as the corresponding move for placing Carlos Gomez on the 10-day DL. It's not clear yet how Arroyo will be used, as he's primarily played third base for Durham.

Certainly, it would have made more sense from a positional aspect to call up outfielders like Jake Bauers or Justin Williams. Arroyo is likely just a short-term depth add for the Rays, as they hope Gomez doesn't need any more time beyond the minimum 10 days on the DL. Arroyo may see a spot start or two, but now is not the time to add him.

Matt Wiswell45 weeks ago
Christian Arroyo sent back down to AAA

With the activation of outfielder Hunter Pence on Sunday, Giants No. 2 prospect Christian Arroyo's first stint as a Major Leaguer came to a close after 34 games.

For Arroyo, who hit his way to the big leagues with a hot debut at Triple-A Sacramento, he's now played more than twice as many games at the Major League level than at Triple-A. "We don't need this 22-year-old kid sitting, he needs to be playing everyday," Bochy said.

Giants shortstop Christian Arroyo went 2-for-5 with a double and three RBIs on Wednesday against the Mets.

Arroyo broke a ninth-inning tie with a bases-clearing double, which upped his RBI count to nine on the season. The 21-year old rookie has five extra-base hits in his 66 plate appearances so far and with a spot near the heart of the Giants' order, Arroyo makes for a nice play.