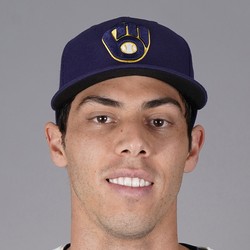 Christian Yelich will make his spring debut Friday against the Giants.

Coming off signing a major sever-year extension on Thursday, Yelich will make his spring debut on Friday. He will serve as the team's designated hitter and bat third. Yelich (knee) entered spring training with no restrictions and should be ready by Opening Day. He is slashed .329/.429/.671 with 44 homers, 97 RBI, 100 runs and 30 stolen bases across 580 plate appearances in 2019. Yelich is an absolute surefire top-4 overall pick in fantasy drafts.

Christian Yelich signed a seven-year, $188.5 million extension with the Brewers on Thursday.

Yelich was close to signing an extension earlier this week, and now it’s official. He will be part of the Brewers outfield for the foreseeable future. The 2018 NL MVP slashed .329/.429/.671 with 44 home runs, 97 RBI, 100 runs scored and 30 stolen bases across 580 plate appearances last season. Yelich is a surefire top-3 pick in fantasy drafts in 2020.

Outfielder Christian Yelich and the Milwaukee Brewers are close to an agreement on a new contract worth more than $200 million, according to a report from MLB insider Ken Rosenthal.

Yelich, 28, is still under control on a team-friendly contract for three more seasons, so this extension likely combines a big payday for the player with some added, affordable control for the team. Despite having his 2019 season cut short by a fractured kneecap, Yelich batted .3209 with 100 runs scored, 44 home runs, 97 RBI, and 30 stolen bases in just 130 games.

Yelich (knee) entered spring training with no restrictions and will make his debut later this week. The 28-year old finished second in the NL MVP voting, slashing .329/.429/.671 with 44 home runs, 100 runs scored, 97 RBI and 30 stolen bases in 130 games. Barring a setback, Yelich is a surefire top-three pick in all league formats.

Christian Yelich told reporters that he's good to go and feeling great, adding that he should be ready to go for the start of Spring Training.

Yelich indicated that if the team had a meaningful game tomorrow he'd be able to participate. This is great news for the Brewers and fantasy owners as it appears Yelich will enter the spring fully healthy following the fractured kneecap he suffered at the end of the 2019 season.