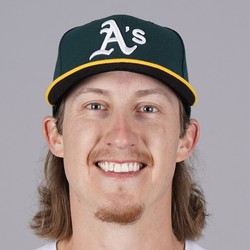 Gossett will likely miss all of 2019 due to the surgery. The 25-year-old pitcher started five games for the Athletics this season, logging a 5.18 ERA and 1.36 WHIP. There is no reason for fantasy owners to try to stash Gossett.

Daniel Gossett surrendered three earned run on eight hits across five innings, walking two and striking out three as the A's lost to the Rays 4-3.

Gossett had a fairly decent outing although back to back to back solo shots to C.J. Cron, Joey Wendle and Wilson Ramos in the top of the third was as forgettable a stretch for the young hurler as they come. He takes an 0-3 record and 6.05 ERA into a match up with the Royals next.

Daniel Gossett allowed just one unearned run on four hits, striking out five across seven innings as the A's lost to the Mariners 1-0.

Absolutely heart breaking stuff considering that the Mariners couldn't even earn the run but, sadly, the A's lineup couldn't muster more than three meaningless singles against starter Marco Gonzalez and a pair of relievers. The lone run that Gossett surrendered was courtesy of a Marcus Semien error. He'd been utterly fantastic in the minors and after a couple rough starts against the Halos, may be finally finding his footing. His numbers, thanks to those two outings, remain fairly hideous as he now has an 0-2 record with a 5.65 ERA and a 1.33 WHIP.

Daniel Gossett lasted only 3 1/3 innings surrendering five runs on five hits while striking out three in the A's loss to the Angels.

Gossett was actually better than the other guy, Angels starter Parker Bridwell, who was knocked out in the second but having now faced the Angels twice and giving up nine runs in 7 1/3 innings, it's hard to imagine he wants to face them again any time soon.

Outside of deep AL-only leagues, Gossett has essentially zero fantasy appeal. He is merely an MLB roster filler at this point.

Bobby Sylvester2 years ago
Who Should I Draft?
Do Not Sell
Are you looking to contact Customer Support about a subscription or account related question?
Yes
No, I'm a California resident looking for the California Consumer Privacy Act form