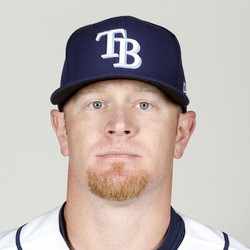 David Carpenter retired both batters he faced in the eighth inning as he came in with one on and one out.

Since he was acquired by the Nationals from the Yankees on June 11, Carpenter (0-1, ERA 4.03) has made four scoreless appearances.

David Carpenter pitched 2/3 of an inning on Sunday night against the Red Sox, not allowing a base runner in his second hold of the season.

Carpenter has not allowed a run in nine of his ten appearances this year and has only allowed five hits in 9 2/3 innings. Carpenter has not allowed more than two hits in any outing this season and has allowed one baserunner or fewer in eight of ten appearances. Carpenter is second in line on the Yankees for holds as a right-handed reliever, but he has been good this season. He only has five strikeouts in 9 2/3 innings this season, but 9.4 K/9 for his career, so there is potential for the hard throwing righty.

David Carpenter pitched one inning for the Yankees on Tuesday without a walk, hit, strikeout, or run allowed. Carpenter has a 3.00 ERA this season.

Chris Zolli5 years ago
David Carpenter rocky against the Rays

Asked to get the last out of the seventh inning, David Carpenter walked Tim Beckham to allow Rene Rivera to come up as the tying run. He induced a ground ball from Rivera though, as the Yankees went on to win 4-1 over the Rays.

Carpenter, acquired with Chasen Shreve from the Braves, has had a decent start with the Yankees, pitching eight innings and allowing five hits and three runs while striking out five and walking three. The strikeout and walk numbers are troublesome, though; the Yankees' bullpen combined strikeouts per nine excluding Carpenter is 10.96 and they have only have walked 20 batters in 56 2/3 innings. Carpenter is a useful option out of the bullpen, especially if he creeps back to a strikeout per inning, but is not worthy of a fantasy spot since he is not even the set-up man for the Yankees.

David Carpenter pitched the eighth inning for the Yankees on Wednesday night, allowing one hit and striking out two.

Carpenter has allowed three runs in 7 2/3 innings this season and has five strikeouts this season. He also has allowed seven baserunners this season, a solid .91 WHIP. Carpenter allowed too many hits last year, 61 in 61 innings, but has only allowed five hits in the young season. Carpenter should provide a good amount of strikeouts, 9.5 per nine for his career, but will not get save or holds opportunites, negating his fantasy value.