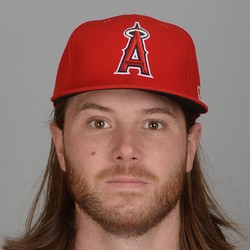 Dillon Peters (4-4) allowed seven runs on seven hits and two walks while striking out two through 3 1/3 innings in Sunday's 8-5 loss to the Astros. He was charged with his fourth loss of the season.

Dillon Peters (4-3) allowed two runs on five hits and one walk while striking out three in Tuesday's 3-2 loss to the Athletics. He picked up his fourth win of the season.

Peters allowed a two-run homer to Khris Davis in the fourth inning, but turned in a solid outing aside from that on his way to his fourth win of the year. He owns a 4.72 ERA, 1.49 WHIP and 53:24 K:BB in 2019. His next scheduled start is Sunday, home against the Rangers.

Dillon Peters allowed two runs on five hits and two walks while striking out two through four innings in Wednesday's 3-2 win over the Yankees. He did not factor into the decision.

Peters has logged a total of 11 1/3 innings and has not topped 4 1/3 innings in any of his last three starts this past month. He owns a 4.81 ERA and 1.51 WHIP with 50 strikeouts in 63 2/3 innings this season. His next scheduled start is Monday, home against the Athletics.

Dillon Peters (3-3) allowed four runs on five hits and three walks while striking out one in Wednesday's 4-3 loss to the Indians. He took his third loss of the season.

Peters struck out just one batter while walking three and allowing five base hits in Wednesday's 4-3 loss. He owns a 4.83 ERA and 1.49 WHIP with 48 strikeouts in 59 2/3 innings this season. His next scheduled start is Wednesday, away against the Yankees.

Dillon Peters allowed six hits on four runs and three walks while striking out three through four 1/3 innings in Friday's 5-4 win over the White Sox. He did not factor into the decision.