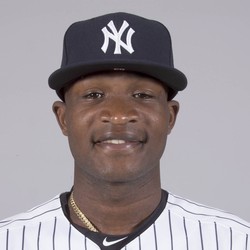 German was placed on administrative leave by MLB back on September 19th for allegations of domestic violence. This suspension is being made retroactively, so he'll miss the first 63 games of 2020. No criminal charges were filed against German but this is the largest suspension MLB has given out under their domestic violence and abuse policy.

Buster Olney of ESPN reports Domingo German will not pitch again in 2019, regular season or post-season.

German was placed on administrative leave on Thursday for assaulting his girlfriend earlier this week. A police report hasn't been filed but German could still wind up facing a lengthy suspension.

There are no additional details at this time, but the Yankees released a statement staying that they fully support the measures being taken by the Commissioner's office. German had won 18 games for the Yankees this season, striking out 153 batters over 143 innings with a 4.03 ERA. He had already been moved to a relief role to limit his innings down the stretch, and it is now unclear if he will return to the team this season or be available in the postseason.

Domingo German pitched 2 1/3 scoreless innings in relief against the Angels on Wednesday, allowing one hit and two walks while striking out two. He did not factor into the decision.

German has been moved into a long-relief role in an effort to manage his innings and prepare him for his postseason role with the Yankees. The 27-year-old has had a great season with a 18-4 record with a 4.03 ERA and 1.15 WHIP.

German was cruising until Mitch Moreland hit a two-out, three-run home run to make the score 4-0. The young righty has had an impressive year, and now spots a 17-4 record. Friday's start marked only the third time that German had allowed more than three earned runs in his past 12 starts.