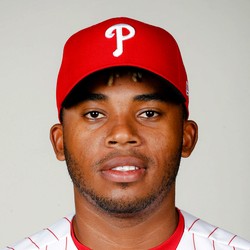 The Phillies had a comfortable 17-5 win over the Pirates on Friday. Edubary Ramos got the win in relief, recording two outs on six pitches. Ramos improved to 3-0 this season with a 1.21 ERA.

Ramos made his first appearance since going on the disabled list following his worst outing of the year on June 24. Stellar in the vast majority of his outings, Ramos has struck out 32 in 29 2/3 innings and has allowed only two home runs in 34 appearances.

Ramos pitched on Sunday and gave up two runs on two hits in 2/3 of an inning. It looks like the injury occurred at some point during that outing. There is no timetable for return and it means Hector Neris gets the call-up from Triple-A.

The Phillies won their series against the Cardinals following a 4-3 victory on Wednesday. Edubray Ramos earned the win in relief, giving up a walk, a hit, no runs and two strikeouts in 1 2/3 innings. Ramos is 2-0 with a 0.64 ERA this season.

Ramos has allowed only two earned runs in 32 appearances, both on home runs. He's struck out 32, walked 11 and allowed 20 hits in 28 1/3 innings this season.

Edubray Ramos threw a shutout inning in relief in Saturday's 4-1 win over the Brewers. Ramos allowed a single hit and hasn't given up an earned run since May 8, covering 13 appearances. Ramos has an ERA of 0.69 for the season.

Ramos has allowed earned runs in only two of 30 games this season. Both of his earned runs were on home runs. He's struck out 28 and walked ten in 26 innings for a WHIP of 1.12.

Edubray Ramos threw a scoreless ninth on Sunday in the Phillies' 4-2 win over the Mets. Ramos walked one and struck out one, earning his career save.

Ramos has allowed just two earned runs this season, both on home runs. In 16 innings, he's allowed just ten hits, while striking out 20. He's been a bit wild, walking eight, but has a solid 1.13 WHIP and 1.13 ERA.