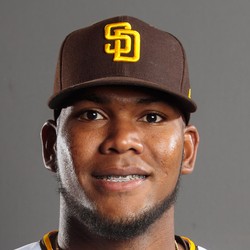 The Padres have placed Franchy Cordero (elbow) on the 10-day injured list.

Cordero was removed from Saturday’s game with the injury. It’s unclear how long he will be sidelined for, but it’s not as if he was making much of a fantasy impact anyway. Cordero has started just four games this season.

Franchy Cordero left Saturday's game versus the Cardinals with a sore elbow.

Cordero was removed in the fifth inning for a pinch-hitter. It's unclear how serious the issue is but the Padres will likely provide an update soon.

Franchy Cordero went 2-for-3 with a double, a single, a walk, an RBI, and a run scored as the Padres beat the Cardinals 5-3 on Friday.

Cordero is now hitting .357 through limited action this season. He has gotten the short end of the stick in a crowded Padres outfield and isn't worth rostering in fantasy until the playing time improves.

Franchy Cordero has been diagnosed with a bone spur in his right elbow after being pulled from his rehab assignment earlier this week. Cordero might require surgery.

With Cordero now on the 60-day DL, he won't be eligible to return until late July.

Franchy Cordero was shut down after feeling something in his elbow taking a swing two days ago, Dennis Lin of The Athletic San Diego reports. He saw Dr. Neal ElAttrache on Tuesday.

No further information is currently available about Cordero's setback, but whatever he felt was significant enough for him to leave the game in the middle of an at-bat. Dr. Neal ElAttrache is a world-renowned surgeon who specializes in Tommy John surgery, but there has been no indication that Cordero would need such a significant surgery. Look for an update on his status in the coming days, but for now it sounds like he will be out a few more weeks at the very least.