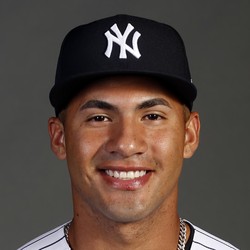 Gleyber Torres went 2-for-5 as the Yankees defeated the Rangers 14-7.

Torres had struggled of late, going 1-for-16 over his last four games, including 0-for-9 since returning from last week's injury scare. The 22 year-old has had a magical sophomore season in the Bronx, hitting 38 home runs and driving in 90 runs.

Gleyber Torres (hamstring) is not expected to start Sunday against the Blue Jays, Bryan Hoch of MLB.com reports.

Torres was removed from Friday's game against the Blue Jays due to an apparent right knee injury. The team is being cautious and had the star infielder have the MRI and he is sitting out on Saturday as a precaution. Fantasy owners should keep an eye on updates to see if Torres will be back in the lineup on Sunday.

Gleyber Torres (knee) was removed from Friday's game against the Blue Jays as a precaution, and he'll be re-evaluated Saturday, Matt Ehalt of Yahoo Sports reports.

Gleyber Torres was removed from Friday night's game with a right knee injury. Torres slid for a ball in the field, then his knee appeared to buckle on him as he attempted to throw. After a visit from the team trainer and Yankees' manager Aaron Boone, Torres remained in the game but was pulled a few innings late, likely for precautionary reasons.

John Aubin23 weeks ago
Gleyber Torres gets a rest on Thursday

Gleyber Torres is not in Thursday's lineup against the Angels, Lindsey Adler of The Athletic reports.

Torres is getting a routine day off on Thursday as the Yankees shuffle their lineup around with DJ LeMahieu starting at second base and Gio Urshela at third. Expect the 22-year-old infielder back in the lineup on Friday.