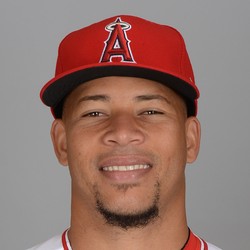 Hansel Robles (5-1) gave up two runs on three hits and no walks while striking out two through one inning in Wednesday's 3-2 loss to the Athletics. He was charged with his first loss of the season.

Entering the game with a one-run lead, Robles allowed a two-run home run to give him a blown save and the loss. He hadn't blown a save since August 21st and had a 1.17 ERA since June 1st coming into this appearance. Robles has a 2.48 ERA, 1.02 WHIP with 75 strikeouts through 72 2/3 innings.

Hansel Robles allowed one hit and zero walks while striking out one through a scoreless inning in Tuesday's 3-2 win over the Athletics. He picked up his 23rd save of the season.

Hansel Robles allowed one hit while striking out two in a scoreless inning to earn the save in Wednesday's 3-2 win over the Yankees.

Robles' 22 saves are good for 18th most in baseball. He is under team control until 2021 and could be the closer for the Angels in the foreseeable future. Robles own a 2.33 ERA and 1.00 WHIP with 71 strikeouts in 69 2/3 innings this season.

Hansel Robles walked one while striking out two through one 1/3 scoreless innings to earn the save Sunday.

Hansel Robles pitched a perfect ninth inning with one strikeout in Saturday's 8-7 win over the White Sox. He earned his 20th save of the season.

Saves have been few and far between for Robles recently, this was just his fourth save since the calendar flipped to August. He owns a 2.48 ERA and 1.04 WHIP with 66 strikeouts in 65 1/3 innings this season.