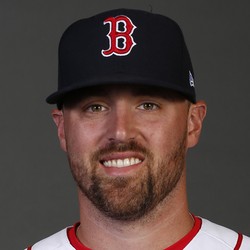 Elbow inflammation has kept Hembree out of action since the start of August, but he's been cleared to rejoin the Red Sox ahead of Monday's series finale against the Rays after getting through a simulated game with no issues Sunday. The righty owns a 4.06 ERA, 1.38 WHIP, and 45:18 K:BB across 37 2/3 innings this season.

Heath Hembree (elbow) will throw a simulated game Friday and could be activated next week, Alex Speier of The Boston Globe reports.

Hembree has been out since August 1st with right elbow inflammation but has been throwing bullpen sessions and trying to return. With there only being a handful of games left don't expect Hembree to have much of an impact for fantasy owners.

Heath Hembree picked up the save after allowing a hit and striking out one in a scoreless ninth inning Sunday against the Tigers.

Hembree has been one of the Red Sox best relievers this season. The 30-year-old veteran has a 2.64 ERA, 1.11 WHIP and 38/12 K/BB ratio in 30 2/3 innings with two saves and four holds. It is hard to tell if he will get more save opportunities but he is worth owning in leagues that count both holds and saves.

John Aubin32 weeks ago
Heath Hembree could get activated on Tuesday

The Red Sox are expected to reinstate Heath Hembree (forearm) from the 10-day injured list as soon as Tuesday, Chris Cotillo of MassLive.com reports.

Hembree has been on the IL since June 10th and has been throwing bullpen sessions and should be ready to go. With the Red Sox bullpen in shambles, Hembree has an outside chance of getting save chances and earning the closer's role. Fantasy owners should keep the veteran reliever on their watchlist.

Heath Hembree struck out the side in the 12th inning and to pick up the save against the Orioles on Wednesday.

With the game going into extra innings the Red Sox had already used Matt Barnes and Ryan Brasier who are the main options to close for the team. Hembree got the chance instead. Normally the veteran reliever is in a setup role and is someone worth owning in a holds league.