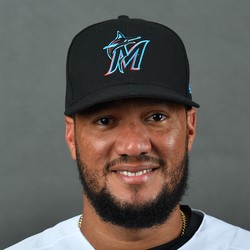 Marlins starter Hector Noesi allowed seven earned runs on six hits and three walks while striking out two over three innings in a no-decision against the Phillies on Friday.

Noesi started off the game by allowing seven runs to put the Marlins in a 7-0 hole, but his offense bailed him out by scoring 19 runs on Friday. He now has an 11.29 ERA and should be avoided in all formats, assuming he makes his next start against the Reds at home.

Noesi has now allowed five earned runs in each of his two starts with the Marlins and now has an 8.18 ERA on the year. His next start is scheduled to come against the Rockies in Colorado and is definitely one that fantasy owners should avoid.

Hector Noesi was called to the mound in the fifth inning. Noesi pitched three innings and let up four runs; three earned. He allowed seven hits and pitched two strikeouts and two walks. Noesi was not brought back for the eighth inning.

Hector Noesi is hot garbage. He could not pitch as a starter and he is struggling as a reliever. Noesi has no fantasy value in any formats. He has a 6.89 ERA and a 1.78 WHIP. He is only striking out six batters per nine innings and allowing almost two HR per nine innings. Noesi does not belong on any fantasy rosters.

Hector Noesi started the season as the fifth starter for the White Sox. Since then he has lost his starting position and was placed in the bullpen. That move has not helped. Noesi pitched 2.0 innings on Tuesday and allowed the Rangers to score four runs on five hits; including one HR.

Hector Noesi has little fantasy value. The thought that he is one injury away from being back in the rotation makes him intriguing, but I would still stay away. Noesi has a 6.75 ERA and a 1.61 WHIP. Noesi has a K/9 ratio of only 6.75 while allowing more than five walks per nine innings. What is worse is that he is allowing more than two HR in nine innings. Whether Noesi is a starter or coming out of the bullpen, his only fantasy impact is as a positive for any hitter he is facing.

Hector Noesi went seven innings, giving up five earned runs, while striking out four. In the first inning, SS Alexei Ramirez made an ill advised spin move on a tailor made double play ball, in which he didn't tag second base. After that the flood gates opened and when the smoke cleared, Toronto had hung a four spot on Noesi and the White Sox. Noesi only gave up one run the rest of the way.

Hector Noesi should not be owned in any formats. Noesi is nothing more then a high risk streaming option.