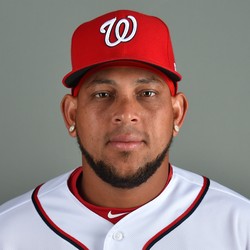 Henderson Alvarez will resume playing catch on Tuesday. He was previously shut down after suffering a setback in his return from shoulder surgery.

Alvarez suffered the setback in his final rehab start, so it's good to see him throwing again. The team likely won't have a clearer time frame for his return until after they see how his arms responds as they begin to ramp him back up.

MRI results on Henderson Alvarez's injured shoulder were inconclusive. He will receive a second opinion from Dr. James Andrews.

It's never a good sign when Andrews is getting involved, especially considering Alvarez is returning from shoulder surgery. He was nearing his return to the A's prior to the recent setback, and now there is no time frame for his return.

Henderson Alvarez experienced discomfort in his throwing shoulder following Sunday's rehab appearance. His return is now put on hold. He was previously expected to join the A's rotation as soon as this week.

Alvarez was nearly back to full-go, so it's unfortunate to see the injury take place at this stage. It's unclear how much more time he'll require, either shut down entirely or more time in the minors rehabbing. More should be known on his status this week, but his return would not appear to be pending considering the discomfort.

Blaine Blontz4 years ago
Henderson Alvarez to return this weekend

Henderson Alvarez is expected to join the Athletics' rotation this weekend in their series against the Yankees. He allowed two runs on six hits in five innings in his final rehab outing.

Alvarez is a player to monitor considering his previous success. While run support could be an issue, he will be pitching in a home park that is very favorable to pitchers.

Henderson Alvarez will begin a minor league rehab assignment on Wednesday. He is expected to be back with the A's sometime in May if all continues to go well in his recovery from shoulder surgery.

All has gone well for Alvarez to this point, but those considering him will want to ensure he makes it through his initial rehab outings unscathed. He could become a viable fantasy option later in the season considering his previous success with the Marlins and the attractive pitching environment in Oakland.

Blaine Blontz4 years ago
Do Not Sell
Are you looking to contact Customer Support about a subscription or account related question?
Yes
No, I'm a California resident looking for the California Consumer Privacy Act form