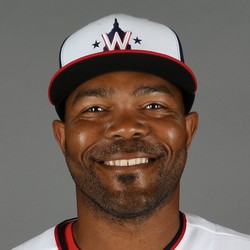 Jesse Dougherty of The Washington Post reports the Nationals are bringing back Howie Kendrick on a one-year, $6.25 million deal.

There’s also a mutual option for 2021. Kendrick has a career year for the World Champion Nationals this last season and reportedly turned down longer term offers to stay in Washington. He’ll play some first base and second base for the Nats in 2020.

Howie Kendrick went 1-for-3 with a walk and a stolen base in Sunday's 4-3 loss to the Braves.

Kendrick knocked a base hit in the seventh inning, before adding a walk and a stolen base in the ninth. The veteran utilityman is slashing .362/.455/.596 with three homers and 10 RBI through 16 games in June.

Nationals infielder Howie Kendrick went 1-for-3 with a solo home run and a walk in Friday's win over the Diamondbacks. The homer was his 12th of the season.

Despite entering the season without a regular spot in the lineup, Kendrick has been called upon often this season and continues to have the most productive first half of his career at 35 years old. He will likely continue to see regular days off, especially as the Nationals start to get healthier, but he has earned playing time going forward, and his production and positional versatility make him valuable in all fantasy formats.

Nationals infielder Howie Kendrick went 1-for-2 with a solo home run in Sunday's win over the San Diego Padres. The homer was his 11th of the season.

Kendrick continues to play well whenever the Nationals plug the veteran into the lineup, although Sunday's home run came as a pinch-hitter in the eighth inning.

Nationals infielder Howie Kendrick went 2-for-3 with a home run, a double, two RBIs, and two runs scored in Tuesday's win over the White Sox. The homer was his 10th of the season.

Kendrick continues to play well when given playing time for the Nationals, and he will likely be in the lineup again on Wednesday after second baseman Brian Dozier exited Tuesday's game with a forearm bruise.