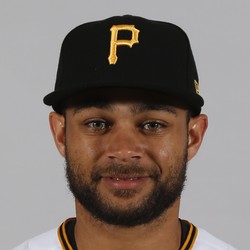 Jason Martin went 1-for-4 with an RBI double in the Pirates' 4-3 win over the Nationals on Sunday.

Boy, it's must feel good to have a .500 BABIP. Martin is hitting .353 since being recalled from Triple-A thanks to some rather good fortune on batted balls. There's not much fantasy value to be had here.

Jason Martin was promoted from Triple-A Indianapolis to the Pittsburgh Pirates on Friday.

Martin will take the roster spot of reliever Kyle Crick, who was placed on the 10-day injured list on Friday. Originally acquired in the Gerrit Cole trade, Martin posted a .589 OPS at Triple-A last season. He'll serve as a depth outfielder for Pittsburgh, a club that currently has four outfielders on their injured list. There is no fantasy value to be had here.