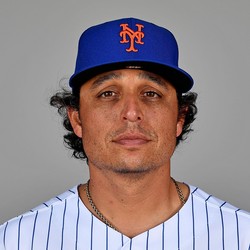 Vargas had thrown a quality start his last time out but will now finish the year with a 4.51 ERA over 149 2/3 innings.

Phillies starter Jason Vargas allowed two earned runs on five hits and two walks while striking out eight over 6 2/3 innings in a win over the Indians on Saturday. The win was his first since joining the Phillies at the trade deadline.

Vargas has not been very good since joining the Phillies and finally tossed a quality start and earned his first win since arriving in Philadelphia at the trade deadline. He will take a 4.40 ERA into what should be his last start of the season against the Nationals in Washington.

Phillies starter Jason Vargas allowed four earned runs on three hits and one walk while striking out six over three innings in Sunday's loss to the Red Sox.

Vargas has now allowed six earned runs over just six innings in his last two starts combined, and he will take a 4.48 ERA into his next start against the Indians in Cleveland.

Phillies starter Jason Vargas allowed two earned runs on six hits and three walks while striking out three over three innings in a no-decision against the Braves on Tuesday.

Vargas has still not earned a win in eight starts with the Phillies, though some of his starts have been better than others. Tuesday's was not great, as he gave away an early 4-0 lead before being removed. He will take a 4.31 ERA into his next start against the Braves in Atlanta.

Phillies starter Jason Vargas allowed two earned runs on four hits and no walks while striking out six over 5 1/3 innings in Thursday's no-decision against the Reds.

Vargas had allowed nine earned runs over his last two starts but took a shutout into the sixth inning on Thursday. Ultimately, he allowed two earned runs before exiting and the Philadelphia bullpen went on to lose the game in extra innings. He will take a 4.27 ERA into his next start against the Braves at home.

Mike Maher - The Birds Blitz44 weeks ago
Who Should I Draft?
Do Not Sell
Are you looking to contact Customer Support about a subscription or account related question?
Yes
No, I'm a California resident looking for the California Consumer Privacy Act form