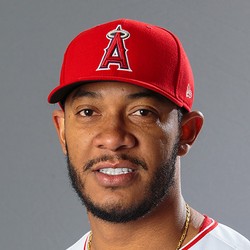 After further examination, J.C. Ramirez has been diagnosed with a torn UCL in his right elbow and Tommy John surgery is being recommended.

The injury would shut down Ramirez for the rest of the season and even if he doesn't get the surgery, he'd likely be out for the greater portion of the season. Ramirez was off to an 0-2 start logging just 6.2 innings, 7 earned runs and 7 walks.

Before leaving the game on Saturday, Ramirez gave up three runs on two hits and five walks in just two innings pitched. He struck out one. Keep an eye on updates for Ramirez as a DL stint looks likely.

J.C. Ramirez lasted only 4 2/3 innings, surrendering five runs, four of which were earned, on five hits including three home runs as the Angels were blanked by the Indians 6-0.

Ouch. To be fair, the first of the homers was of the inside-the-park variety in the top of the 2nd inning so that wasn't on him but rather the terrible defensive effort behind him. However, he served up a pair of home runs to Yonder Alonso and Tyler Naquin in the fourth inning that effectively knocked him out of the game. He also struck out five and walked two.

J.C. Ramirez dealt 7.0 innings and gave up six runs over eight hits and two walks. He struck out just two batters and was credited with the loss.

Ramirez was looking to push his streak to four starts with two or less earned runs, but things changed drastically after giving up a grand slam to Manny Machado in the seventh inning. He's never going to provide you with a basket full of K's, but he provides quality innings and a serviceable ERA. The Angels will likely continue to give the veteran starts, as their rotation is very thin. Shy away from Ramirez in tough matchups, but feel free to pull the trigger if the opponent is inviting.

J.C. Ramirez pitched 8.0 innings, giving up just six hits and two walks on his way to a quality start win against the Phillies. He fanned just three.

While the K's may not be all there for the veteran righty, he is still eating innings with the best of them in Anaheim. Owned in less than 20% of ESPN leagues, he is a steal on the waiver wire in the right match up. Inconsistency has been a problem for him, so it certainly isn't a long term solution. As for DFP...use him! Take advantage of his low-price and allow the sluggers to play ball.