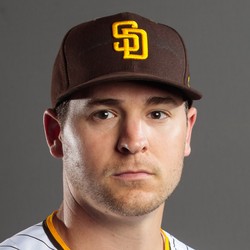 The Phillies placed Jerad Eickhoff on the 10-day injured list on Monday.

Eickhoff lands on the IL with right biceps tendinitis. He had recently been moved to the bullpen and doesn't need to be owned in any fantasy leagues these days.

Phillies manager Gabe Kapler says Jerad Eickhoff is being moved to the bullpen for now.

Eickhoff was hit hard on Monday versus Arizona and now owns a 5.02 ERA on the year. The Phillies aren't naming a replacement starter for Sunday just yet.

Phillies starter Jerad Eickhoff allowed seven earned runs on five hits and two walks while striking out two over three innings in a loss to the Arizona Diamondbacks on Monday. The loss drops him to 3-4 on the season.

Eickhoff continued to struggle with allowing home runs on Monday, serving up homers to the first three batters of the game en route to allowing a total of five on the night. After a strong start, his ERA has ballooned to 5.02 on the year. His next start is scheduled to come against the Braves in Atlanta.

Phillies starter Jerad Eickhoff allowed three earned runs on four hits and no walks while striking out five in Tuesday’s win over the San Diego Padres. The win brings him to 3-3 on the season.

Eickhoff did allow another home run on Tuesday, something he has struggled with over his last several starts, but he managed to limit the damage en route to a quality start and a win. He will take a 4.14 ERA into his next start against the Diamondbacks at home.

Phillies starter Jerad Eickhoff allowed four earned runs on eight hits and no walks while striking out four in a loss to the St. Louis Cardinals on Thursday. The loss drops him to 2-3 on the season.

Eickhoff was once again done in by the long ball on Thursday, as he allowed three more in the loss. After starting the season not allowing any home runs in his first five appearances (four starts), he has now allowed at least two in his last four starts. His ERA has jumped up to 4.10 on the season, and his 5.05 FIP and .260 indicate that it is more than just some recent bad luck. His next start is currently scheduled to come against the Padres in San Diego.