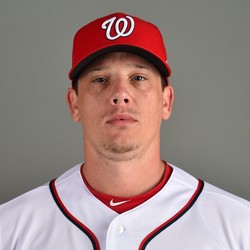 The Nationals placed Jeremy Hellickson on the 10-day injured list with a right shoulder strain.

The move is being made retroactive to May 20th. Hellickson has struggled this year, posting a 6.23 ERA through eight starts.

Nationals starter Jeremy Hellickson allowed three earned runs on four hits and three walks while striking out one over one inning in Sunday's loss to the Chicago Cubs. The loss drops him to 2-3 on the season.

Hellickson now has a dreadful 1.72 WHIP and 6.23 ERA on the season while striking out 30 batters over 39 innings. His next start is currently scheduled to come against the Miami Marlins at home.

Nationals starting pitcher Jeremy Hellickson allowed five earned runs on six hits and four walks while striking out three over five innings in Tuesday's loss to the New York Mets. The loss drops him to 2-2 on the season.

Hellickson is not very appealing in fantasy right now, regardless of the format. His ERA is sitting at a round 6.00 while he has allowed five earned runs in three of his last five starts. His next start is scheduled to come against the Chicago Cubs at home.

Nationals starter Jeremy Hellickson allowed six runs (three earned) on seven hits and three walks while striking out four over four innings in a loss to the Milwaukee Brewers on Wednesday.

While the defense did not help him, Hellickson was not sharp on Wednesday. He will now take a 5.52 ERA into his next start against the New York Mets at home.

Washington starter Jeremy Hellickson allowed two earned runs on four hits and no walks while striking out nine in a no-decision against the Phillies on Friday.

Hellickson now has a 5.33 ERA and has allowed five home runs and 16 earned runs over 27 innings pitched. He will look to get things on the right track when he takes on the Brewers in his next start.