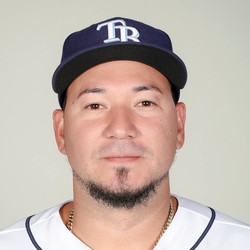 Jesus Sucre went 3-for-4 with three RBI and a run scored to lead his team over the Yankees 5-3 on Saturday. He drove in a run with a single in the seventh inning, then plated Cedric Mullins and Joey Rickard with a double in the ninth.

Don't expect many games like this from Sucre as the veteran catcher has just a .221 batting average over his career. Sucre is only worth owning in two-catcher leagues if there are any left around.

Jesus Sucre, who remains in Venezuela while awaiting a work visa, will report to Orioles camp within the next couple of weeks, Roch Kubatko of MASN Sports reports.

With the delay, Sucre would not make his debut in the Grapefruit League until March. Orioles' manager Brandon Hyde also mentioned there is enough time to compete for a roster spot. Sucre slashed .232/.268/.330 in 390 plate appearances for the Tampa Bay Rays over the last two seasons.

Jesus Sucre has not reported to Spring Training yet due to visa issues, Roch Kubatko of MASN reports.

Sucre signed a minor league contract with the Orioles back on February 1st. This doesn't appear to be a long term issue, although there is no timetable for his return to the United States. Sucre slashed .232/.268/.330 in 390 plate appearances for the Tampa Bay Rays over the last two seasons.

The Orioles have signed catcher Jesus Sucre to a minor league contract that includes an invitation to Spring Training.

Jesus Sucre went 1-for-3 with a solo home run in Saturday's loss to the Blue Jays. He was pinch-hit for in the ninth inning by Ji-Man Choi.

Sucre has put together a nice week, recording a hit in five straight games. In that time he's 8-for-13 with three runs, one RBI, and one home run. His playing time and production likely won't stay like this and he does not need to be owned.