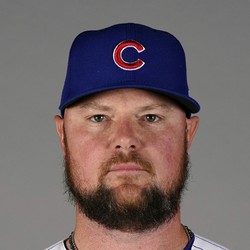 Jon Lester allowed one run on four hits and two walks while striking out six across 2 2/3 innings in Friday's Cactus League game against the White Sox.

Lester was able to overcome allowing too many base runners by striking out six across two 2/3 innings. He has had back-to-back quality outings. Lester owned a 13-10 record, 4.46 ERA, 1.50 WHIP and 165 strikeouts across 171 2/3 innings last season. The crafty lefty will look to keep things rolling in his next scheduled spring start.

Jon Lester allowed two hits while striking out four through three scoreless innings in Sunday's 7-3 win over the Mariners.

After getting roughed up for five runs (three earned) in his first spring outing, Lester bounced back to toss three shutout innings on Sunday. The 36-year old had a down season in 2019, owning a 13-10 record, 4.46 ERA, 1.50 WHIP and 165 strikeouts across 171 2/3 innings. At this point of his career, Lester is a streaming option and mainly provides depth at the backend of fantasy rotations.

Jon Lester allowed two runs on eight hits with no walks and four strikeouts across six innings in a no-decision against the Pirates on Wednesday.

Jon Lester did not factor into the decision in Wednesday's loss to the Reds, allowing one run on six hits and two walks over five innings, while striking out five.

Lester fired 49 strikes in his 77 pitches, and left with the game tied 1-1 in the sixth inning. He bounced back nicely from a couple rough outings, and now holds a 4.51 ERA and 161:52 K:BB through 165.2 innings this season. He'll take on the Pirates next on Tuesday.

The Cubs made three errors during Lester's start, but also put up 17 runs, allowing Lester to capture the win despite the lackluster outing. He owns a 4.59 ERA, 1.50 WHIP, and 156 strikeouts in 160.2 innings this season. He'll take on the Reds next on Wednesday.