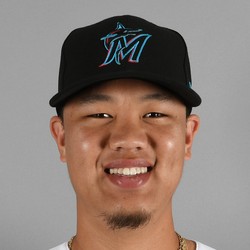 Marlins starter Jordan Yamamoto tossed six shutout innings in a no-decision against the New York Mets on Thursday, striking out 10 while allowing just one hit and three walks.

Yamamoto had hit a rough patch of late but managed to finish the season strong on Thursday and could be an intriguing back-of-the-rotation option for owners in deeper leagues heading into 2020 drafts.

Marlins starter Jordan Yamamoto allowed two earned runs on six hits and three walks while striking out three over 4 1/3 innings in a no-decision against the Nationals on Saturday.

This was Yamamoto's first appearance in nearly a month as he was on the injured list with a forearm strain. He will take a 4.83 ERA into what should be one last start against the Mets in New York.

Marlins starter Jordan Yamamoto allowed six earned runs on six hits and four walks while striking out three over 3 2/3 innings in Saturday's loss to the Philadelphia Phillies. The loss drops him to 4-5 on the season.

After a strong start with the Marlins, Yamamoto has regressed. He has now allowed at least four earned runs in six of his last seven starts, going 0-5 over that span while seeing his ERA jump from 2.60 to 4.87. He is scheduled to take on the Reds at home in his next start.

Marlins starter Jordan Yamamoto allowed two runs on four hits and one walk while striking out nine over 5 2/3 innings in a no-decision against the Rockies on Sunday.

The nine strikeouts were a career-high for Yamamoto, who fell just one out shy of a quality start on Sunday. He has lost four straight decisions after a hot start but has been limiting the baserunners and the damage over his last few starts. He'll take a 4.31 ERA into his next start against the Phillies at home.

The Dodgers went on to win this game 15-1 on Tuesday, so Yamamoto was not the only pitcher to struggle in this one. He has now dropped four straight decisions after a hot start and will take a 4.42 ERA into his next start against the Rockies in Colorado.