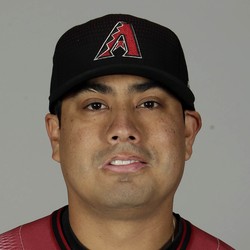 Jorge De La Rosa pitched an inning Friday versus the Reds. He would hold them scoreless to earn his first save.

De La Rosa could get another opportunity at some point down the stretch. It is nowhere near a sure thing but with Strop out, the Cubs will be looking at multiple pitchers as a possibility for pitching in the final inning.

De La Rosa has pitched really well for the Dbacks and has lowered his ERA to 0.87 but only has a 5.23 K/9. He may get double digit holds like last season but is a tough pickup because of his low K/9.

Jorge De La Rosa pitched a perfect inning Friday but didn't strike anyone out on the night.

De La Rosa has little to know value fantasy wise and there should be much better options on the wire.

Jorge De La Rosa allowed eight hits and four walks through just 3 1/3 innings on Tuesday, relenting six runs (five earned) versus the Diamondbacks. Two of the eight hits cleared the wall, both coming off the bat of Jean Segura.

De La Rosa drops to 8-8 with a 5.22 ERA. In his last three starts, he's allowed five, five and six runs, though only 10 have been earned, and two starts have been against the Diamondbacks, against whom he holds a 1-1 record this season with a 5.21 ERA.

De La Rosa has been okay since a horrible stretch to begin the season, but as a whole has very little fantasy value. He's now 8-7 with a 5.09 ERA, the worst of his career without injury.