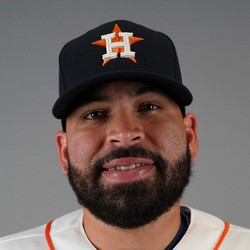 Jose Urquidy (2-1) allowed three hits and a walk while striking out two through six scoreless innings in Friday’s 4-0 win over the Angels. He earned his second win of the season.

Jose Urquidy allowed one run on one hit and a walk while striking out 10 through five innings in Wednesday's 5-3 loss to the Athletics. He did not factor into the decision.

Urquidy's only hit allowed was a solo home run to Marcus Semien in the fourth inning. Urquidy was brilliant in his spot start, but will presumably shift back to the bullpen. He owns a 4.78 ERA, 1.16 WHIP and 34:6 K:BB in seven major-league outings this season.

Jose Urquidy (1-1) allowed six runs on eight hits and one walk while striking out one through four innings in Wednesday's 10-4 loss to the Indians. He took his first loss of the season.

Urquidy had been dominant in his two previous starts, but didn't have his best stuff on Wednesday. Most of the damage came from three-run homers by Roberto Perez and Carlos Santana. He owns a 5.87 ERA, 1.39 WHIP, with 24 strikeouts through 23 innings. Urquidy does not have an upcoming start scheduled, and is expected lose his rotation spot to newly acquired starter Zack Greinke.

Jose Urquidy allowed one run on four hits and two walks while striking out six in six innings in Friday's 5-3 loss to the Cardinals. He did not factor into the decision.

Urquidy has now posted his second straight solid start, and all four hits he allowed in Friday's game were singles. In his last two starts, he owns a 1.38 ERA, 0.62 WHIP, and 15 strikeouts in 13 innings pitched. His next scheduled start is Wednesday, away against the Indians. As long as Urquidy is in the rotation, he is worth a pickup in all leagues if you need pitching help.

Jose Urquidy (1-0) allowed two hits on one run while striking out nine in seven innings in Saturday's 5-1 win over the Rangers. He earned his first win of the season.

Urquidy struggled in first two starts in the majors, but was dominant in Saturday's win. With the strong outing, he will at least receive one more turn through the rotation. Urquidy owns a 5.54 ERA and 1.31 WHIP with 17 strikeouts in 13 innings. His next scheduled start would be next weekend against St. Louis, if he is still in the rotation.