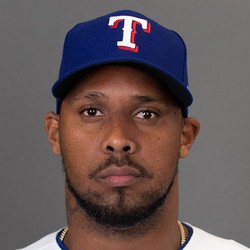 The Rangers added Juan Nicasio to their 60-man player pool.

The team also added Edinson Volquez to their summer camp roster. The two veterans will serve as pitching depth this season.

Phillies reliever Juan Nicasio allowed one hit over 2/3 of an inning to earn his first save of the season in Monday's extra-inning win over the Chicago Cubs.

Nicasio entered the game with a 5-4 lead in the 10th inning after regular closer Hector Neris pitched in a tie game in the ninth inning. While Neris has the closer's job locked down for the time being, Nicasio has been pitching his way into more high-leverage opportunities over the last few weeks.

Juan Nicasio was placed on the 10-day disabled list Friday due to right knee inflammation, Greg Johns of MLB.com reports.

Nicasio ended up on the DL earlier in the season with the same issue and only needed a minimum stay. It sounds like this could be a similar case. Fantasy owners can move on from the 31-year-old reliever if there are other options on the waiver wire.

Juan Nicasio struck out the only batter he faced in the seventh inning in the Mariners' win over the White Sox on Sunday.

Nicasio struck out Kevan Smith with two runners on to end the seventh inning and hold the Sox scoreless. In his first appearance back from the All Star break, Nicasio continued his strikeout dominance and is now averaging 1.26 K's per inning on the season. However, with his 6.03 ERA and .309 opponent BA, Nicasio tends to get hit hard by those batters that he does not punch out.

Juan Nicasio did not allow a run on two hit batters with one strikeout over one inning of relief against the Yankees on Wednesday.

In his first appearance in two weeks after being placed on the DL, Nicasio immediately hit two of the first three batters that he faced. However, he settled in and struck out Greg Bird and got Miguel Andujar to fly out to right to keep the Mariners' 5-2 lead intact. These were the first two batters that Nicasio has hit this year over 29 2/3 innings. He will look to get back into the swing of things and continue to improve on his 38:2 K:BB ratio on the season.

Sam Marchant2 years ago
Who Should I Draft?
Do Not Sell
Are you looking to contact Customer Support about a subscription or account related question?
Yes
No, I'm a California resident looking for the California Consumer Privacy Act form