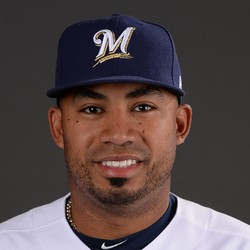 Junior Guerra and the Arizona Diamondbacks have come to terms on a one-year, $2.55 million contract.

The 34-year-old posted a 3.55 ERA in 72 appearances out of the bullpen last year. The contract includes a club option for 2021.

Junior Guerra earned the save Wednesday against the Cardinals, retiring the only batter he faced.

This was Guerra's third save of the season, and comes after blowing saves in each of his previous two outings. He owns a 3.88 ERA and 1.14 WHIP this season.

Junior Guerra allowed one run (unearned) in 1 2/3 innings to earn his seventh victory of the season as the Brewers defeated the Nationals 15-14.

Guerra improved to 7-4 on the year with the victory, but also picked up his sixth blown save as the Brewers held on to defeat the Nationals 15-14. The righty has pitched well of late, but earned the third blown save of the evening for Milwaukee’s bullpen.

Junior Guerra pitched two innings of scoreless relief and earned the victory as the Brewers came from behind to defeat the Twins 6-5.

Guerra struck out two in his two innings of relief work, and kept the Brewers in the game. The righty now carries a streak of four consecutive scoreless appearances.

Junior Guerra pitched a perfect sixth in the Brewers' 5-4 victory over the Reds.

Guerra is often utilized in a similar role, one which fantasy owners can take advantage of thanks to his SP/RP eligibility.